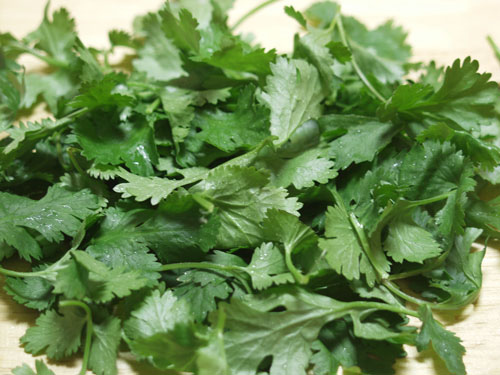 Cilantro is also known as coriander. Coriander seeds (the dried fruit of the plant) are a traditional spice in Indian and East Asian cuisine. Cilantro, on the other hand, is a common ingredient in Hispanic culture, used for spicing dips and rice. Mediterranean food utilizes cilantro in seasoning meats. The herb can be eaten fresh or cooked by boiling or steaming. All parts of the plant are edible, but only the dried fruit (or seeds) and leaves are eaten. The look of cilantro –broad leaves and thin, fibrous stems — also gave it the name Chinese parsley.

Snip stems at base. Store in loose, plastic bag in refrigerator. Maintain dryness until eating and wash before serving. Another fun way is to wrap tops with plastic or cover with bag; and keep in jar or glass of water stems-down. Cilantro can last nearly 2 weeks.

Cilantro is a great addition to many foods including dips, pasta, soups, or even salads. Toss cilantro into guacamole or stir in with fresh greens to add spice to the food. Cilantro is versatile and can be added to almost anything.

Fresh herbs that have a fragrant odor and a fibrous texture. Avoid herbs that are wilted, damaged, or discolored.

WHY IT’S GOOD TO EAT

Cilantro is an herb that if harvested properly can grow in gardens year-round, but is most often harvested during temperate spring and fall months. Cilantro is common in NC between March and May, and between September and November.

Cilantro is a delicate herb and therefore harvested by hand. It is picked from the ground after about a month of growing. It is commonly grown with other herbs including parsley, thyme, or basil.

Black Beans with Cilantro – Sauté onion in a pot until softened. Stir in 1 cup beans, salt, ¼ cup of water, and a healthy handful of cilantro. Stir until heated through. Serve hot and garnish with fresh cilantro.