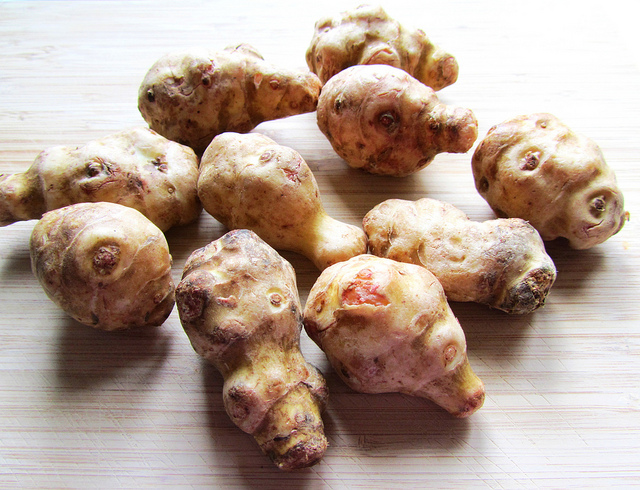 Jerusalem artichokes, often called “sunchokes” are native to North America and are no relation at all to artichokes. Jerusalem artichokes belong to the sunflower family. The white flesh is nutty, sweet and crunchy like chestnuts when raw. Baked in their skins, they become more like potatoes with a mild taste of artichoke hearts.

This fresh tuber tastes like a water chestnut and is often used in salads. The tubers can also be cooked like potatoes – boiled, mashed, roasted, or sautéed. Do not overcook, as they quickly turn mushy.

Select firm sunchokes that are free of mold and wrinkles. Sunchokes vary in color with their shades ranging from dark brown to light brown, similar to ginger.

Planted in early spring, and harvested after the first frost, Jerusalem artichokes often prefer cooler climates, although they can be produced in North Carolina.

Scalloped Sunchokes – Scrub or peel artichokes. Slice each artichoke to 1/4 inch thick slices. In a wok or frying pan, heat olive oil and butter on medium-high heat. Add sliced artichokes, garlic, salt, pepper and parsley; stir well to coat artichokes. Stir-fry for about 4 minutes, stirring often. Do not overcook artichokes; they should be slightly crunchy.

Sunchoke Salad – Combine Jerusalem artichokes, arugula and Parmesan in a large bowl. Drizzle with balsamic vinaigrette and toss to coat.