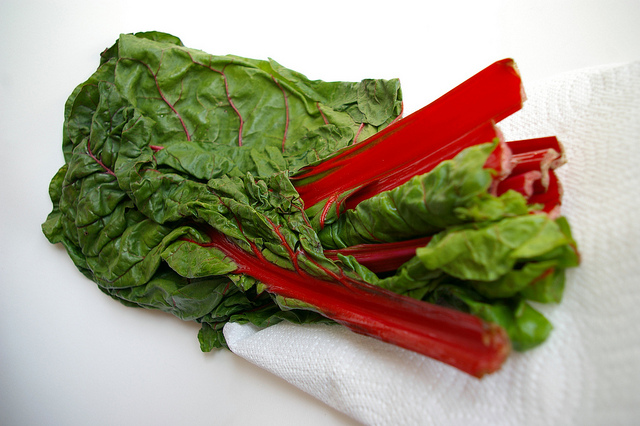 Swiss chard is included in the same family of vegetables as beets and spinach, but commonly grouped with mustard greens, kale, and collards. Swiss Chard has broad leaves and a husky, crisp stalk. The stalk ranges from white to hot pink or red, often called “Rainbow Chard”, with the leaves darkening towards the tops of the vegetables. The leaves and stalk are both edible.

Store Swiss Chard in cold refrigeration, preferably in crisper drawer to ensure humidity and temperature control. Do not wash until serving, as this will quicken wilting. Properly stored Swiss Chard will last between 1 and 2 weeks.

Swiss Chard can be eaten raw or cooked. Raw it is a great salad or greens substitute as the leaves and stalk are both edible. Both provide a crispy crunch to any meal. When cooking steam, boil, or stir-fry for best results.

Select Swiss Chard that has a crisp, firm stalk and healthy, broad green leaves. Avoid any chard with wilting, discoloration, or damaged greens.

Swiss Chard has a somewhat longer growth season than other veggies, but can often be found beginning in late March and through late fall. Swiss Chard has a common relative, Rainbow Chard, which is the exact same plant but with a colorful stalk instead of white.

Swiss Chard is most commonly harvested by hand. When the plant is mature, outer leaves are broken off or snipped at the stalk. By harvesting the outer leaves, the inner leaves will continue to grow allowing for continued harvest.

Sauteed Swiss Chard Salad—Wash, and chop Swiss chard. Stir-fry in a pan with garlic and olive oil until the garlic browns and chard leaves are soft. Sprinkle with salt and pepper, and serve!